by Penelope Ojih
in Uncategorized
0
1.9k
VIEWS
Share on FacebookShare on Twitter
ADVERTISEMENT
Controversial on-air-personality, Daddy Freeze, has once again claim that he is probably the best Bible teacher in the country, as he reveals to his followers why men should not uncover their heads in church.
Cool FM Lagos radio personality, Ifedayo Olarinde, popularly known as Daddy Freeze, who is the founder of popular online church, Free The Sheeple Movement, has taken to his Instagram page to teach the followers that the Holy Bible, never said men should uncover their head in church.
Here is his biblical teaching in full below;
************* 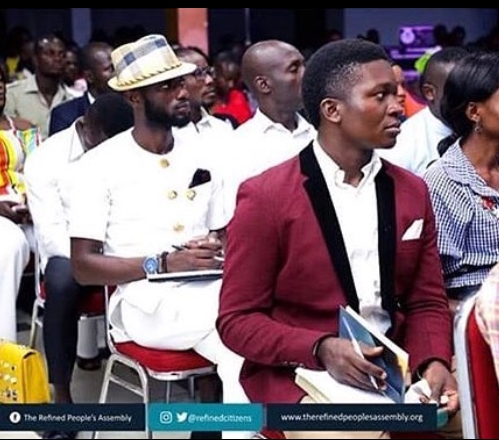 “This is a picture of a man wearing a hat in a church service yesterday. Do you see anything wrong with the picture cuz I don’t!
We have been fed lies for so long that we have become almost totally dumbed down. I’m sure people will jump at me and say Daddy Freeze but the Bible says men should uncover their hair in church, let me break your heart, the Bible NEVER said so.
Let’s examine the verse where this emanated from.
(1 Corinthians 11:4) – New International Version
Every man who prays or prophesies with his head covered dishonors his head. The Bible doesn’t say men must uncover their hair in church, it clearly states: ‘WHEN PRAYING OF PROPHESYING’.
Does the picture show a man praying or prophesying? NO! He is just there listening to Sunday morning lamba!
Furthermore, if we examine the Bible critically, it goes on to say;
(1 Corinthians 11:5) -New International Version
But every woman who prays or prophesies with her head uncovered dishonors her head–it is the same as having her head shaved.
I referenced the original manuscript in Greek and it says this same exact thing. Now, here is where our hypocrisy as Christians highlights itself. Please take a look at the picture again.
Can you see that all the women have their hair uncovered? Despite what the Bible says:
(1 Corinthians 11:10) – New Living Translation
For this reason, and because the angels are watching, a woman should wear a covering on her head to show she is under authority. Even the Muslims respect this verse but we don’t.
Further examination of the scriptures reveal:
(1 Corinthians 11:16) – New Living Translation
But if anyone wants to argue about this, I simply say that we have no other custom than this, and neither do God’s other churches.
The Apostle mentions the word ‘custom’ which means ‘tradition’. The original Greek manuscript uses the word ‘συνÎ®θειαν’ meaning ‘practice’ in God’s Churches.
So are we adopting this practice or not? If we are BOTH MEN/WOMEN MUST BE BOUND BY IT, if not, both must be free from it, Jesus who was less than 33 years of age, insulted the Pharisees in their 70s and 80s for their hypocrisy, let’s not transfer his curses to ourselves.”
ADVERTISEMENT

Daddy Freeze slams follower who called him a “she pig”

Serena Williams back in first match since February