In a performance at the Cambridge Junction theatre last week, on the eve of the Parliamentary vote on Britain’s exit from the European Union, Dr. Victoria Bateman carried out a naked protest as she argued that “Brexit leaves Britain naked”

During her naked protest, she argued that

“Britain has sold itself the emperor’s new clothes. She explores how Brexit leaves the British economy exposed, how it has uncovered and fuelled dangerous anti-immigration sentiments, and how it has laid bare the failures of past policy – failures that mean that too many people believe they have nothing to lose from Brexit simply because they have nothing at all.”

Victoria concluded with a warning: that Britain is changing direction, away from travelling the road that leads to a free and open society to instead travel a path that is nationalistic and unwelcoming.

She added that “In the dark times ahead, we must all keep on making the case for freedom – a freedom that goes beyond the individual nation state and that allows each and every one of us to make the most of our lives no matter where we are born.”

Reacting to the Naked protest, Piers Morgan, who is very vocal about his opinions, shared the video and wrote:

This may just have turned me into a Brexiteer. ?

Watch the video below. 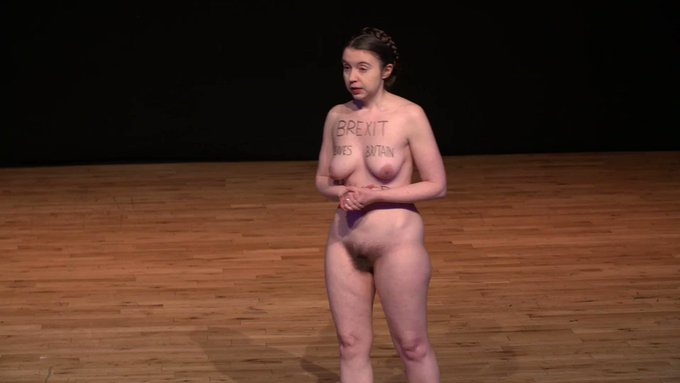 Let me add this to @eucopresident‘s words: Brexiteers have placed Britain on the #YellowBrickRoad. It’s a long & arduous journey. And, when we get to the end, will all the time, energy & pain be worth it? Listen here https://vimeo.com/314265471  #BrexitLeavesBritainNaked #RemaininEU

Brexit day of judgement: parliament to vote on Johnson’s deal