Fernandes has a hand in three United goals, Fred hits double and Odion Ighalo scores his first goal for club

Fernandes scored his second United goal when he converted from the spot in the 27th minute – three minutes and 40 seconds after it was awarded – when Simon Deli stuck his arm out at a Daniel James shot, with VAR intervening to confirm the decision.

The Portugal international was also the starting point for the next two goals, with Odion Ighalo (34) scoring for the first time in a United shirt on his first start before Scott McTominay (41) drove an effort home on his first start since Boxing Day.

It looked like Brugge would see out the second half without conceding, but two goals in the final 11 minutes compounded their misery. Both were scored by Fred too, turning home from a Jesse Lingard cut-back (82) before a thunderous second with the last kick of the game (90+3).

Ole Gunnar Solskjaer’s side have now gone seven games unbeaten in all competitions – with only Brugge scoring against them in the first leg during that run – and will discover their next opponents in the Europa League last-16 draw on Friday.

It was a breathless start at Old Trafford, with both sides having their chances. Simon Mignolet made three brilliant saves, denying Juan Mata and Fernandes with the latter also have a shot sent just past the post by the goalkeeper’s fingertips. At the other end, David Okereke almost caught Harry Maguire out before Mats Rits lifted a shot just over the crossbar.

But from the 22nd minute onwards, it was all United. It was sparked by a penalty awarded when Deli threw his arm out to divert a James shot over the crossbar. The referee instantly pointed to the spot and showed the Brugge defender a straight red card, both of which were confirmed after a lengthy VAR check.

Man of the match: Bruno Fernandes.

Three minutes and 40 seconds after the penalty had initially been awarded, the waiting Fernandes was able to take it. He expertly held his nerve as he eased the ball past Mignolet with a skip just before striking, which could become his penalty trademark similarly to team-mate Paul Pogba’s stuttered run-up.

It was then Ighalo’s turn in the spotlight as he scored his first United goal. Fernandes was involved again, standing a ball up for the waiting Mata at the far post. The Spaniard then cut the ball back for the waiting Ighalo and he easily turned it home before wheeling away for a rapturous celebration.

McTominay has had a horrid time with injuries in 2020, but he put some demons to bed with a fine third United goal just before the break. Fernandes played a superb pass that took out two Brugge players and send Fred bursting into the area. The Brazilian then cut the ball back for the unmarked McTominay at the top of the area and he thundered a curling effort into the back of the net.

The second half was a quieter affair with the result already decided in the opening 45 minutes. Mignolet made another fine save in the 68th minute, getting down low inside a packed six-yard box to see away a thunderous Luke Shaw shot with Odilon Kossounou hacking the ball to safety.

Fred had only one goal in his United career heading into the game, but tripled that tally in the final few minutes. He added the fourth after some brilliantly unselfish play from Lingard, who burst down the left flank before cutting the ball back for Fred and the Brazilian easily slotted home.

He then added another with the final kick of the game. Tahith Chong – who came on for James at half-time – sent the ball back into his path and it was a thunderbolt effort from Fred that rounded off a truly wonderful United performance.

Man of the match – Bruno Fernandes

Thursday’s performance from Fernandes showed why United pursued him for so long, and they are reaping the rewards of their January signing.

2012 – Bruno Fernandes is the first Portuguese to net in consecutive appearances for Manchester United in all competitions since Nani April 2012. Arrived. #UEFAEuropaLeague 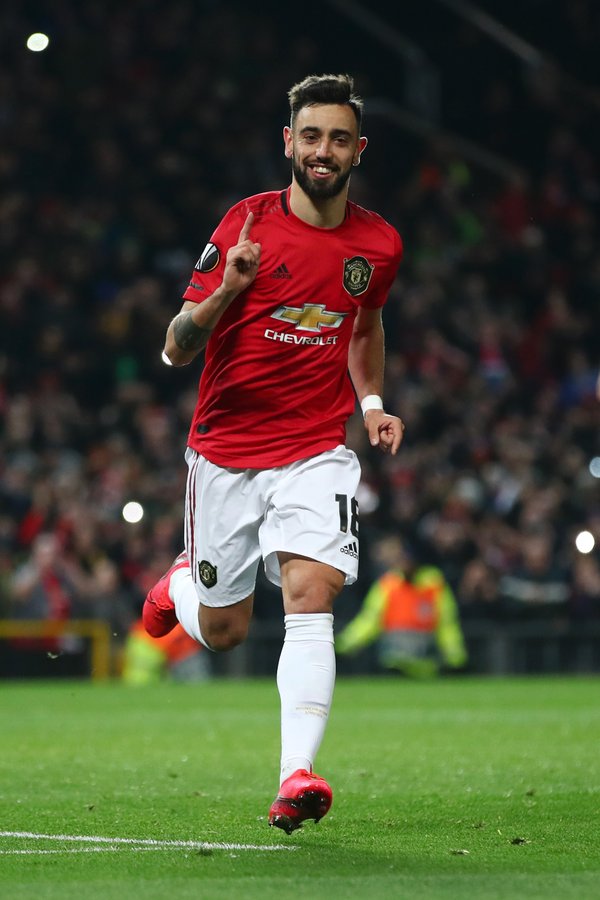 370 people are talking about this

After an extended wait, the midfielder slotted home a cool penalty when it could have been easy to overthink it in nearly four minutes, before having a hand in the next two goals. While they were not assists, they were vitally important passes and just a few of the many he made.

He also wowed the crowd with his tricks and flicks and he got a huge roar from the fans when he was substituted in the 64th minute as Ole Gunnar Solskjaer waits to unleash him against Everton on Sunday, live on Sky Sports. Fernandes is just getting started in England and it’s exciting to see what he will do next.

He said: “As a fellow striker myself, I know how important that first goal is. He has been close a couple of times, you can see he sniffs goals, he wants to be there where it sometimes hurts but with that goal as well, he is sharp in his head.

“As the ball is played over to Juan, he spins and is on the six-yard line when Juan puts it there. That’s a natural striker.”

Man Utd will find out their last-16 opponents when the Europa League draw is made on Friday.

Manchester United will travel to Everton in the Premier League on Sunday (kick off 2pm). Club Brugge will also play away at Genk in the Belgian Pro League (kick off 1.30pm).

WHO releases guidelines on mask use against COVID-19

Nigeria records 328 new cases of coronavirus as toll rises to 11,844