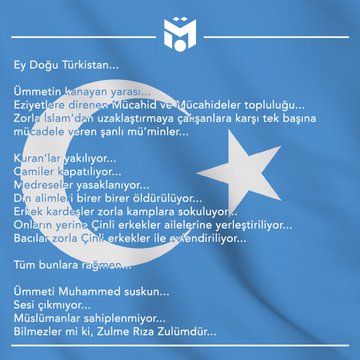 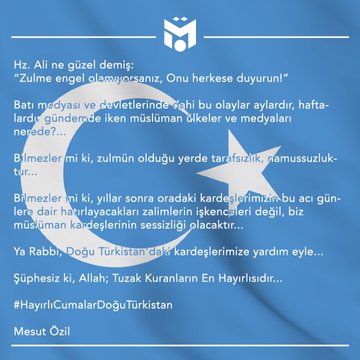 On his Instagram account, the Turkish international wrote under the headline, “East Turkistan: Bleeding Wound of Islamic Ummah,” calling Uighurs “warriors who resist persecution… Glorious believers who put up a fight alone against these who forcefully move people away from Islam.”

In China, he wrote: “Qurans are burned… Mosques were closed down… Islamic theological schools, Madrasahs were banned … Religious scholars were killed one by one … Despite all this, Muslims stay quiet.”

“Don’t they know that giving consent for persecution is persecution itself? The honorable Ali, son-in-law of the Prophet Muhammad, says, ‘If you cannot prevent persecution, expose it,” he added.

China is accused of carrying out repressive policies against the Uighur, a Turkic Muslim group, and restraining their religious, commercial and cultural rights.

China’s Xinjiang region is home to around 10 million Uighurs. The Turkic Muslim group, which makes up around 45% of Xinjiang’s population, has long accused China’s authorities of cultural, religious and economic discrimination.

Up to one million people, or about 7% of the Muslim population in Xinjiang, have been incarcerated in an expanding network of “political re-education” camps, according to U.S. officials and UN experts.

In a report last September, Human Rights Watch accused the Chinese government of carrying out a “systematic campaign of human rights violations” against Uighur Muslims in Xinjiang.